After the morning qualifying race, the competition moved to central Borås from the quarter-finals.

Most of the favorites made it through to the final – and the men were first, with seven athletes in the starting box instead of six, due to a semi-final complaint.

Here the riders were all within seconds of crossing the arena with Tim Robertson (NZE) in the lead, but on the final loop the athletes took different course choices until the penultimate check .

Matthias Kyburz was first there, never looked back and kept high speed to the finish line to take the win ahead of Robertson. Sweden’s August Mollén had a great day and took third place on his World Cup debut ahead of Norway’s Kasper Fosser.

– It was a difficult course with a lead that changed all the time. I’m really happy that I had a clear route and an easy execution plan and it worked out well, said Matthias Kyburz after the race.

The different course choices on the last loop of the course did not scare the reigning European Knock-Out Sprint champion.

– It’s always a very difficult situation, but I knew I had to focus on myself. I hadn’t checked his route, so I just followed my plan. From the penultimate control, I knew by heart where to go, says Kyburz.

Four Swedes qualified for the women’s final, leaving Andrine Benjaminsen (NOR) and Megan Carter Davies (GBR) to challenge the favorites on the field.

And with some smart route choices, Megan Carter Davies almost did it. Going through the arena she had a clear lead over the rest of the group but Tove Alexandersson showed her unstoppable strength in the final checks and took the win – just as she did in the individual sprint on Thursday. 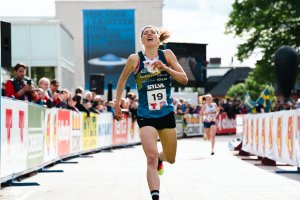 Megan Carter Davies finished second – the best result of her career so far – and Andrine Benjaminsen (NOR) kept the remaining Swedes behind her and finished third.

Sunday’s Sprint Relay in Borås will be the final competition of the first round of the World Cup in Sweden.

Orienteering in and around Anchorage, Alaska

Orienteering in Sherborne | Echo of Dorset