A very exciting day of orienteering ended with the overall victories of Tove Alexandersson of Sweden and Matthias Kyburz of Switzerland in the first-ever WOC knockout sprint. One a winner with supreme strength, speed and focus, the other a master of tactics as well as speed.

There were desperately close finishes in some of the quarters and semi-finals, which were played out in difficultly detailed ground around central Fredericia. Then the finals were very different; the men were measured to a good extent, with Tim Robertson NZL in particular trying to escape on various route choices for the rest, but it was Sweden’s August Mollen who finished closest to Kyburz, who timed his run to the finish perfectly and knew exactly where he was going. The bronze medalist was Jonatan Gustafsson, also Swedish after the total sprint for the line. 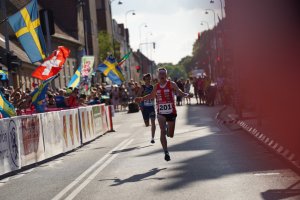 Matthias Kyburz SUI on the way to victory

The women’s race quickly turned into a chase after Tove Alexandersson mistook the course in the final. Megan Carter Davies GBR was strongest behind her in navigation and speed and took silver. Eef van Dongen, the Netherlands, was strong and smart too, and won the first-ever orienteering medal for her country. Afterwards, Alexandersson said in the post-race interview that she felt fully focused the whole time and her best race was the final. 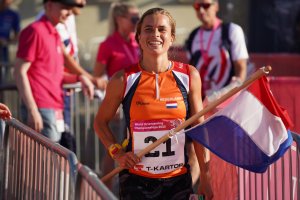 Now another day of rest and the last events of the championships, the qualification and the individual sprint final, will take place on Thursday.

Final results of the knockout sprint

Everything about the “Vera Orienteering” event

Orienteering Championships are coming to Sunbury