Spectators and IOF LIVE viewers were treated to some nice surprises on Saturday’s middle distance podiums at the European Orienteering Championships in Estonia.

Once again the athletes tested their ability to navigate their way through the dense Estonian forest east of Rakvere.

And just like on Thursday’s Long Distance, the terrain was tricky and caused many time losses among the runners. Heavy rain falling during the race did not improve visibility.

Huge victory for Aebersold
Last runner Simona Aebersold (SUI) was definitely among the favorites to win the women’s category and was eager to get her revenge after her 14th place finish in the Long Distance.

And with a near-flawless run, she won her first individual championship gold medal after 35 minutes of running on the green by a big margin.

The home crowd crossed their fingers for Evely Kaasiku (EST), who held the leader’s chair for a while after a great race. Kaasiku finished second – 1.27 minutes behind – his best international result so far.

The men of Sweden ruled the forest
If Swedish fans were thirsty for medals after the women’s race, their thirst was quenched an hour later when the men’s race was over.

Anton Johansson (SWE) held the white leader’s chair for most of the race after running without significant time loss over the 6.3 kilometer course.

His team-mate Albin Ridefelt also avoided big mistakes and with a quick course choice towards the end he took over the lead from Johansson by 17 seconds and became European champion. EOC gold is Ridefelt’s first individual championship medal and so is Anton Johansson and silver. 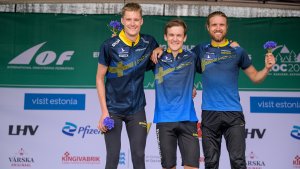 After a well deserved night’s sleep, the EOC athletes will be ready for Sunday’s relays. The women’s relay begins shortly after 10:00 EEST (UTC+3) and the men’s relay will take over thereafter.